WHAT IS MARRIAGE DISSOLUTION?

In the State of Minnesota, the legal term for a divorce is “marriage dissolution.” Marriage dissolution is a legal proceeding designed to terminate a marital relationship, as well as take care of other related issues such as child custody, support and parenting time (visitation); spousal maintenance (alimony); and property distribution.

WHAT IS LEGAL SEPARATION?

Legal separation involves the same procedures and court costs as a divorce; however, a legally separated individual may not legally re-marry. Parties may have religious or other reasons for wanting a legal separation rather than a divorce.

WHAT ARE THE GROUNDS FOR MARRIAGE DISSOLUTION OR LEGAL SEPARATION?

In Minnesota the only ground for dissolution of marriage or legal separation is “an irretrievable breakdown of the marital relationship.” An irretrievable breakdown occurs when there is no reasonable prospect of reconciliation of the differences between the marriage partners and the marriage cannot be saved. Evidence of marital misconduct cannot be used by the court to determine whether a dissolution should be granted, how property should be divided, or whether child support or maintenance should be awarded and, if so, in what amount. However, this “no fault” concept does not change the adversary nature of a dissolution proceeding–it is a lawsuit.

Jurisdictional Requirements:
In most cases, you or your spouse must live in Minnesota for 180 days before you can file for dissolution in Minnesota District Court.

Decisionmaker:
Contested issues in a dissolution are decided by a judge, not a jury.

Length of Time:
How long a dissolution proceeding takes depends largely on the complexity of a case, the amount of issues in dispute, and the number of other cases/matters on the court docket. If the parties are already in basic agreement and/or if there is little in dispute, the proceeding may be concluded in as little as 90 days. If there are issues which must be tried before the court, it may be 12 to 18 months or longer before the matter is set for a final hearing.

Costs:
In addition to attorney’s fees and costs, the parties to a divorce will be required to pay court filing fees and, depending upon the issues in dispute, may be required to pay additional costs for custody evaluations, mediations or other similar items. Generally, each party is responsible for his or her own legal costs and attorney’s fees. Under certain circumstances, however, the court may order a contribution from the other party.

Temporary Relief:
In a case where there is a need for immediate relief such as temporary child support, maintenance or a decision on who will remain in the marital home, the party seeking relief may file motion papers with the court. The court will hear such matters on an expedited basis and issue an appropriate order, based upon the evidence presented at the motion hearing.

Concluding a Dissolution:
A dissolution may be resolved by a number of different methods, as follows: 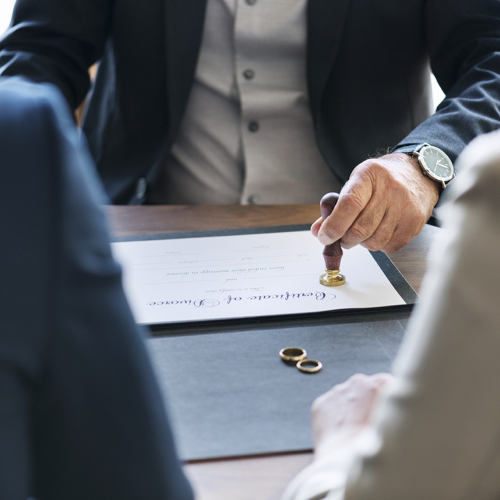 " I got excellent service from Kalene @ Engel Law Office. She answered my questions in a timely fashion and made sure I understood everything about my case. If I did not understand it she explained it another way until it became clear to me. I highly recommend Engel Law Office. "

" Kalene Engel represented me during my child custody case. It didn't take long to realize that she truly did care about my daughter and I. I felt very lucky to find an attorney with that much empathy. That process is very stressful and can be very expensive. The fact that Kalene is so very organized, has a great memory and works fast helped to relieve some of that stress. Working with Kalene, I felt confident that whatever the outcome of my case it was going to best I would get. I was very pleased with the results! I would highly recommend Engle Law Office. "

" Attorney is very knowledgeable and friendly to work with. "

" Kalene Engel is an exceptional lawyer! She is professional, and hard working. She puts all efforts forward for her clients. She gave me hope even when it seemed impossible. Thanks to Kalene I was reunited across state lines with my son. I can't say enough positive about my experience, and I would recommend her to anyone! "

" She was very helpful, knowledgeable, and always told me how it was when it came to things involved in my case. Highly recommend attorney for family court involving children. She fought for my child and myself during case and truly cares for her clients and the best interest of the child/children involved. She gave me reassurance and comfort before and during court proceedings. I felt very confident during my court case know Kalene Engel was my lawyer. "

" I have worked with and consulted with Kalene on a number of occasions and in different circumstances. She has always been knowledgeable, considerate, and most helpful. Her professional demeanor put me at ease and yet I felt a comfortable, casual sense in our correspondence. I have no reserves about recommending her service. "

" Kalene is an exceptional attorney helping me out not only with my family court, but also with my other court. She has always been helpful and responds quickly with any questions I've had. "

" In every encounter I've had with Kalene Engel, she has gone above and beyond the call of duty. She has helped me and my family, always responding to all inquiries not only promptly but with grace, compassion, and honesty. I could not ask for more from any attorney. I would wholeheartedly recommend Kalene to anyone needing legal advice. "